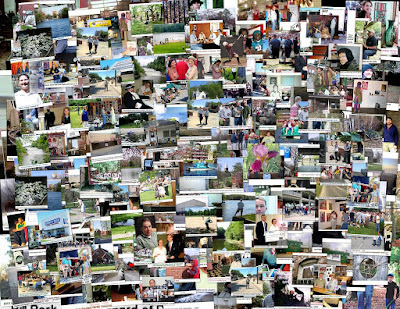 The typeface will be cleaned up, but this collage is what the new blook cover will look like. ... Also the title is being changed from "Carbondale After Blog" to Karmadale After Blog.

This collage was created by Picasa, from a folder of pix from 2003. It is just a test.

Click on the image to see a larger version in the web album.
Posted by Parentheticus at 9:22 AM 1 comment:

What's new and exciting in 2009? In Carbondale, it will surely be the upcoming City Council election. Yesterday, one of the seven City Council candidates stopped into the BP Bus Place to say 'hi', and I assured him that I'll support the candidate(s) with the most convincing internet presence. So far, Pawel Sawicki has made the best webpression via Scott @ Carbondale Bytelife.

And nationally, the new President, Barack effing Hussein Obama! That's exciting! I get a Matthewsiastic "thrill up my leg" thinking about it. Or it could be the sweet guitar jam I'm listening to.... a live recording at Hangar 9, Dec. 2005, with Robbie Stokes, Chris Duarte, Din Dayemi, Grant Morgan, and the Majnun drummer and keyboard.
----------------
Now playing: Robbie Stokes - Stoked

I hope Obama can do something about decreased bus ticket commissions. Since I moved the station to a better location on East Main St., Greyhound has reduced commission rate, and raised ticket prices, so fewer people are using the bus. With gas prices dropping, bus ticket prices are still at $4/gal prices. If something doesn't give, I may be forced to quit, since The 'Hound already cuts into prose-writing time that could be going to my blook. ...

... As does Twitter, which I prefer to blogging, since I can usually shoot out a couple of 140 character "tweets" without too much effort, but sometimes it takes a bit of crafting to compact the message. Would make a good technical writing exercise. ... Of course, not everyone takes pains to convey much relevant information. I usually include a link, as do most of the tweeters I follow.

Often, following is reciprocal. ... You follow @BarackObama, and he follows you. I'm up to 77 followers. Barack Obama had 153,379. I select a mix of interesting people to follow, reporters like @Jayette in Springfield, PR mavens like @Dana_Willhoit, Web 2.0 technology guru and political savant @DaveWiner, or fake expert, comedian John Hodgman.

I take my blog and twitter (micro-blog) writing seriously. Writing in 140 characters or less, requires pithy expression, unlike blogging, where I get paid by the word. Ha ha. ha. ha. ha. (And the word is secret, like on the Groucho Marx You Bet Your Life quiz show.)

Wishing all who read this Happy MMIX!